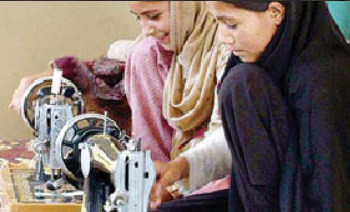 A home-based worker is someone who works within the home boundaries or at other premises of their choice, except the premises of an employer or contractor’s workplace; who works at home for remuneration or monetary returns and who is self-employed or does piece-rate, own-account or contract work, which results in a product or service as specified by the employer/contractor.

This particular definition of a home-based worker excludes a person with the status of an employee, who occasionally performs their work at home in addition to their usual workplace. It also excludes a home-based worker who enjoys a certain degree of autonomy to undertake an economic activity, i.e. self-employed.

The goals of the earlier (draft) national and provincial policies on home-based workers include recognizing and accepting the workers through legislative and administrative actions; according to the legal equality and focusing on their needs, concerns, and demands through an institutional approach of gender mainstreaming at all levels.

Both policies inform the federal and provincial governments’ objectives in addressing the concerns of these workers on a priority basis. And the policies also reaffirm their commitment to bring laws and regulations concerning the home-based workers in conformity with the constitutional provisions and relevant international labor standards.

The policy on home-based workers seeks to devise a mechanism for the mandatory and free registration of all workers through a tier system at the federal, provincial, district, tehsil/taluka, and union council levels. The details of this mechanism are to be worked out in consultation with all the relevant ministries and provincial departments.

The policy envisages preparing provincial action plans, which will be implemented by a committee. In the case of Punjab, a Policy Steering and Coordination Committee is going to be established. This committee will have the authority to conduct the required monitoring of the functions of various stakeholders. The goal of the policy is to recognize and accept home-based workers; accord legal equality to them and focus on their needs, concerns, and demands.

The key issue, however, is whether the policy will be implemented in letter and spirit. There are numerous areas that require careful examination, such as union formation, labor inspection, registration, access to social protection, occupational safety, and health, and application of minimum wage. In the post-18th amendment situation, the provinces have promulgated their own industrial relations laws (IRLs). A major characteristic of the IRL is lack of uniformity. In the case of Punjab, for example, the right to unionize is limited to workers belonging to establishments having 50 and more employees.

Thus, a majority of the working women and men are being bypassed in terms of exercising their right to bargain collectively, settle disputes, etc.

The policy stipulates ‘labor inspection’ that will have a multi-tiered inspection mechanism. However, there are limitations with regard to the labour inspection imposed by the provincial governments of Punjab and Sindh since 1993. Only recently have labour inspections been allowed. Furthermore, the existing labor inspection machinery is neither capable nor does it have the capacity to extend its outreach to the widely scattered population of the home-based workers.

The policy plans to make compulsory registration of all home-based workers and provide access to social protection benefits. Currently, the employees’ old-age benefit institution and employees’ social security institutions have been able to register a small proportion of the workers of the formal sector. Their total coverage does not exceed six million. How would they reach the millions who are home-based and spread across the country? Furthermore, how would they determine the ‘employer’ for the purpose of getting a contribution?

What is the way forward? First, appoint a high-powered task force in consultation with the provincial governments and with the participation of stakeholders and experts to look into matters with regard to labour laws and administration in the wake of the 18th amendment; ensure conformity of labour laws to global standards and obligations; develop a coordinating mechanism as well as consensus; tailor the policy laws dealing with protecting and promoting the rights of home-based workers and finalise a modality of labor inspection machinery that incorporates them.

Second, convene a national tripartite labour conference and also in all the provinces with a well-prepared agenda to follow up recommendations. Lastly, appoint a truly representative high-powered commission on mainstreaming the informal economy.